Prime Minister Antonis Samaras marked one year in the job on Friday by becoming the leader of what was effectively Greece’s fifth government in four years after Democratic Left’s decision to drop out of the coalition left his New Democracy party and PASOK as the two that remained from a previous partnership of three. The dire economic situation, the pressure of its lenders and the historical absence of consensus politics in Greece meant it was always going to be a challenging job. Samaras enters the second year of his premiership on an equally shaky footing.

Democratic Left’s departure had been in the making for some time. The three parties that formed the coalition in June 2012 did so knowing that Greece had been balancing on the precipice but their intention of moving the country to safer ground soon lost its potential to drive this three-wheeled vehicle on. Beyond securing Greece’s place in the euro and rebuilding trust with the skeptical troika, there was no grand, or even less pronounced, vision to spur the coalition’s efforts. As the drachma risk faded and lenders were placated, so the three-party government’s raison d’etre dissolved. It was replaced by friction fuelled by each party’s desire to stake its claim to any positive development and distance itself from anything negative. As the stardust was blown away, the political and ideological splits were revealed.

END_OF_DOCUMENT_TOKEN_TO_BE_REPLACED 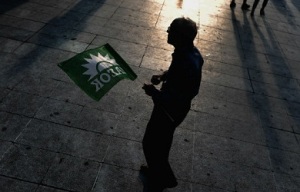 More interested in reaching a “new settlement” with the European Union than ancient Greece, British Prime Minister David Cameron on Thursday defended his belief that the Parthenon Marbles should not be returned to Athens, saying he does not subscribe to the idea of “returnism”. At PASOK headquarters, though, they have no reservations about returnism.

The return of four Socialist deputies who quit the party following a tense parliamentary vote in November to approve a new package of austerity measures and reforms that secured Greece’s latest loan tranche was confirmed on Thursday. The four – Costas Skandalidis, Angela Gerekou, Michalis Kassis and Yiannis Koutsoukos – failed to support the package and lost their place in PASOK’s parliamentary group.

Welcoming them back on Thursday, PASOK leader Evangelos Venizelos said that their time away from the fold was “part of the cost” the party had to pay for Greece getting its December loan installments and apparently reducing drastically the threat of a eurozone exit.

END_OF_DOCUMENT_TOKEN_TO_BE_REPLACED

If the new Greek government is attempting to bamboozle the country’s lenders into submission with its tactical meandering, who knows, it might have struck on a great idea. If it’s trying to convince the Greek people it’s capable of dealing with the economic crisis, then performing more sudden turns than Fernando Alonso going through the Monaco chicanes is just not going to cut it.

Prime Minister Antonis Samaras and Finance Minister Yannis Stournaras caused consternation last week when they suggested there would be no Greek bid to renegotiate the bailout, without making it clear whether this meant abandoning efforts or simply putting them off. There is logic to the strategy of putting aside the renegotiation issue in the sense that the coalition government can draw a line under what has happened in the past, express its commitment to meeting fiscal and reform targets and allow a little time for trust with its lenders to be restored and goodwill credits that could be subsequently cashed in to be amassed.

END_OF_DOCUMENT_TOKEN_TO_BE_REPLACED

A poster moment for Greek politics

Ten tons of illegal election campaign posters were taken down in Athens over the past few days. The political scrap-heap is full, for now.

Having been sworn in as Greece’s new prime minister on Wednesday, Antonis Samaras will hope that this will be his moment of redemption. From rising star to rebel and them from outcast to unlikely unifier, Samaras has covered the whole gamut of political roles. Now, he must fulfill the biggest of them all, at the most crucial of times.

With him in charge, New Democracy veered all over the place like a driver nodding off at the steering wheel. He also managed the unique feat of alienating the party’s middle-ground voters while also losing support to the right. It’s safe to say that Samaras will have to up his game as prime minister.