END_OF_DOCUMENT_TOKEN_TO_BE_REPLACED

ERT off air: Thought for the day 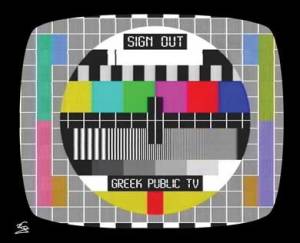 One of the great moments in global radio is BBC Four’s “Thought for the Day.” Greek state broadcaster ERT is one of many that have adopted the format, giving a couple of minutes of airtime on its Second Program to the great and good musing about faith, current affairs and life in general. One can only wonder, though, exactly what the government’s thought for the day was when it decided to shut down ERT and dismiss some 2,700 staff on Tuesday.

There was plenty wrong with ERT, which had long been treated like most other parts of the public sector by successive governments who felt they had supporters to take care of and money to burn. Its 19 regional radio stations speak of an excess that was simply unsustainable. Thessaloniki, a city with 800,000 inhabitants, had three radio stations when Inner London, which has a population of more than 3 million, has only one.

There was also a lot to cherish about ERT, though. It continued to make challenging documentaries when practically nobody else in Greece did. Its stations played music that nobody else would. Even its insistence on sticking with tinny 80s theme tunes for its news and sports shows had a naive charm about it. Most of all, though, it did the job that all national broadcasters should do by being a common reference point for millions. There are few more emotional experiences one can have listening to the radio than hearing Diaspora Greeks cast to the four corners of the earth calling in to a Saturday night show on the Second Program to request Greek songs and share their memories and feelings about the homeland they left behind.