And now, for my next trick… 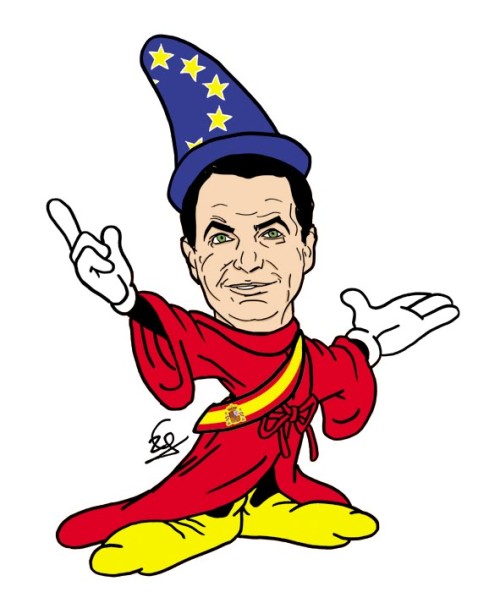 To many people, the European Union is a fantasyland whose very existence and enduring success defy logic. It’s like an old magic trick that continues to captivate audiences, even though everyone’s seen it many times before. But the EU does what all good tricks do: It encourages onlookers to suspend their disbelief and look at the bigger picture rather than the details.

This unique quality was underlined on January 1, when Spain, a country whose economy is disintegrating, took over the presidency of the 27-nation bloc in the middle of a staggering financial crisis with the promise that it would lead the EU to recovery. The spell which the EU has cast over its audience was highlighted by the fact that hardly anyone batted an eyelid at the incongruousness of this situation.

A number of years ago, a Nigerian general whose army had just invaded another African nation appeared live on the BBC World Service to declare that his soldiers had “brought democracy” to the country in question. “That’s great, will you now bring it to Nigeria as well?” was the sharp response from the radio presenter.

Something similar comes to mind when reading the message posted on the official website of the Spanish EU presidency. The country’s prime minister, Jose Luis Rodriguez Zapatero says Spain’s main challenge will be to help Europe build an economy that is “more productive, innovative and sustainable.” But surely if the Spaniards knew how to do that, they would already be applying it to their own economy.

While we in Greece are caught up in our own economic crisis, it’s easy to overlook the dramas being played out in other EU countries, such as Spain. The country’s public deficit for 2009 exceeded 70 billion euros – five times as much as the previous year – to stand at 6.79 percent of gross domestic product. It’s still only about half of Greece’s but nevertheless up 1.2 percent on the 2008 figure.

And like Greece, Spain recently had its credit rating downgraded. Standard and Poor’s lowered the country’s rating from “stable” to “negative” and warned that it faced a prolonged period of sluggish economic growth. But Spain’s most dramatic problem, and an area where even Greece’s disaster of an economy cannot match it yet, is unemployment. The jobless rate stood at almost 20 percent at the end of last year, which is the second-highest in the EU after Latvia. Incredibly for Europe’s fifth-largest economy, unemployment among Spaniards aged 16-24 has reached 42 percent.

All this makes Spain’s task of providing leadership on economic recovery seem far beyond its capability, while its promises of guiding the EU onto the path of financial security ring hollow. Zapatero’s announcement on December 30 that he was introducing a package of measures to help ailing farmers in his own country will have been of interest to our prime minister, George Papandreou — who faces the threat of farmers blocking highways this month — but is unlikely to have convinced Europe’s economic giants that Spain has creative answers to the Union’s economic dilemmas. 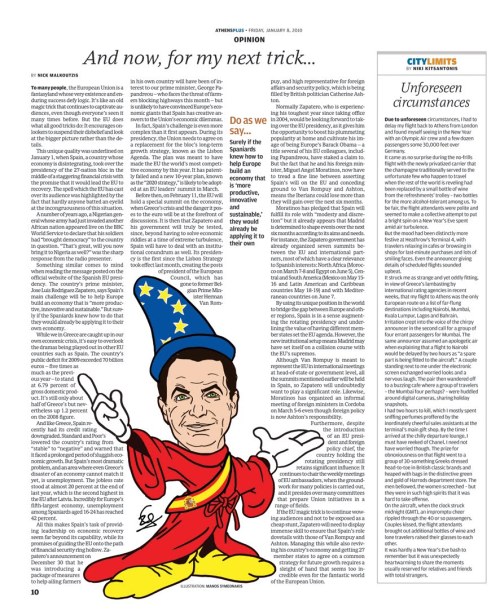 In fact, Spain’s challenge is even more complex than it first appears. During its presidency, the Union needs to agree on a replacement for the bloc’s long-term growth strategy, known as the Lisbon Agenda. The plan was meant have made the EU the world’s most competitive economy by this year. It has patently failed and a new 10-year plan, known as the 2020 strategy, is likely to be adopted at an EU leaders’ summit in March.

Before then, on February 11, the EU will hold a special summit on the economy, when Greece’s crisis and the danger it poses to the euro will be at the forefront of discussions. It’s then that Zapatero and his government will truly be tested, since, beyond having to solve economic riddles at a time of extreme turbulence, Spain will have to deal with an institutional conundrum as well. Its presidency is the first since the Lisbon Treaty took effect last month, creating the posts of President of the European Council, which has gone to former Belgian Prime Minister Herman Van Rompuy, and Foreign Policy Chief, which is being filled by British politician Catherine Ashton.

Normally, Zapatero, who is experiencing his toughest year since taking office in 2004, would be looking forward to taking over the EU presidency, as it gives him the opportunity to boost his plummeting popularity at home and cultivate his image of being Europe’s Barack Obama – a title several of his EU colleagues, including Papandreou, have staked a claim to. But the fact that he and his foreign minister, Miguel Angel Moratinos, now have to tread a fine line between asserting Spain’s will on the EU and conceding ground to Van Rompuy and Ashton, means the Iberians could lose more than they will gain over the next six months.

Moratinos has pledged that Spain will fulfil its role with “modesty and discretion” but it already appears that Madrid is determined to shape events over the next six months according to its aims and needs. For instance, the Zapatero government has already organized seven summits between the EU and international partners, most of which have a clear relevance to Spanish interests: North Africa (Morocco on March 7-8 and Egypt on June 5), Central and South America (Mexico on May 15-16 and Latin American and Caribbean countries May 18-19) and with Mediterranean countries on June 7.

By using its unique position in the world to bridge the gap between Europe and other regions, Spain is in a sense augmenting the rotating presidency and underlining the value of having different member states set the EU agenda. However, the new institutional setup means Madrid may have set itself on a collision course with the EU’s supremos.

Although Van Rompuy is meant to represent the EU in international meetings at head-of-state or government level, all the summits mentioned earlier will be held in Spain, so Zapatero will undoubtedly want to play a significant role. Likewise, Moratinos has organized an informal meeting of foreign ministers in Cordoba on March 5-6 even though foreign policy is now Ashton’s responsibility.

Furthermore, despite the introduction of an EU president and foreign policy chief, the country holding the rotating presidency still retains significant influence: It continues to chair the weekly meetings of EU ambassadors, when the groundwork for many policies is carried out, and it presides over many committees that prepare Union initiatives in a range of fields.

If the EU magic trick is to continue wowing audiences and not to be exposed as a cheap stunt, Zapatero will need to display immense skill to ensure that Spain’s role dovetails with those of Van Rompuy and Ashton. Managing this while also reviving his country’s economy and getting 27 member states to agree on a common strategy for future growth requires a sleight of hand that seems too incredible even for the fantastic world of the European Union.

This commentary was written by Nick Malkoutzis and first appeared in Athens Plus on January 8, 2010.