Democracy squared rather than democracy divided 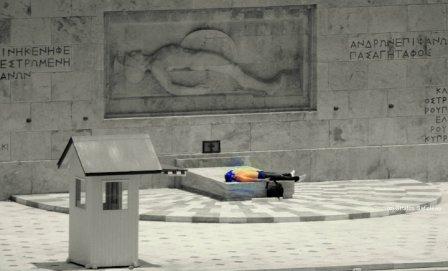 If you’ve been having sleepless nights worrying about Greece’s plight, you can rest easy now. As if by magic, the country’s concerns have been dispelled overnight. Only, rather than a magic wand, it was the waving of a police baton that did the trick when officers removed the dregs of the Indignant movement from Syntagma Square early on Saturday, long after the cup had run dry.

Had you been following the media-fueled public debate in Greece over the last couple of weeks, you would have been excused for believing that the few dozen protesters, their sagging tents and scrappy banners, which had been in situ in Syntagma for the last two months, were the country’s most pressing problem. These hippy wannabees were apparently destroying Greece’s tourism industry, driving the capital’s drug trade and creating a burgeoning market for street traders.

END_OF_DOCUMENT_TOKEN_TO_BE_REPLACED

The paradox of the ‘Indignant’

Thousands of protesters packed Syntagma Square in Athens for a third consecutive day on Friday. Those giving up another evening to vent their anger at Greece’s plight continued to display great enthusiasm and persistence. There was something dramatic about their protest, which took place as ominous clouds rolled across the Attica sky and boneshaking thunder boomed throughout the capital. It felt like someone had splashed out on the special effects in preparation for the ultimate battle: the people vs. the political system. The unstoppable force meets the immovable object.