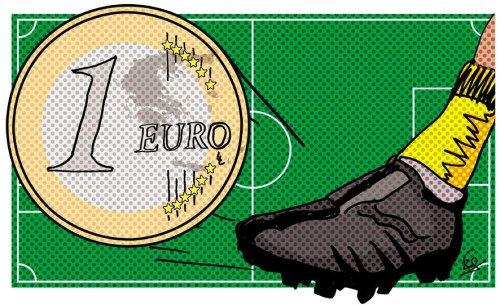 “The difference between you and me is that, if tomorrow there was no more money in football, I’d still be here, but not you,” Arsenal manager Arsene Wenger once told a soccer player’s agent. On Tuesday, Wenger’s north London side was involved in the second leg of a thrilling Champions League tie. Arsenal succumbed to the brilliance of Spanish giant Barcelona and its Argentinean magician Lionel Messi but the encounters were confirmation that whether it is played in England, Spain, Greece or anywhere else, soccer can be so much more than just a game.

Wenger, perhaps more than any other manager, embodies the belief that soccer has something valuable to offer, not just momentary entertainment; that beyond the blood, sweat and tears that fall on the pitch during 90 minutes of play, it can be a true art form that transcends boundaries and languages.

This all seems a world departed from what we experience in Greece, where soccer is mostly antagonistic, not artistic. The grubby disputes off the pitch do not provide an environment that fosters free expression on it. As Barcelona and Arsenal played out their majestic battle, Greek clubs were locked in dispute with the government over sponsorship. Following violence at soccer grounds, PASOK said it was freezing state funding until the sport cleans up its act. Greek soccer clubs receive some 40 million euros a year in sponsorship through the state-owned gambling company OPAP. The clubs reacted by threatening to seek sponsorship from foreign betting companies, which are banned from operating in Greece.

The argument is symptomatic of the pettiness that has held Greek soccer back for many years but it also underlines that the game in Greece, like so many other countries, is no longer driven by fans but by money. Wenger is no stranger to this phenomenon. The Frenchman has professed his football-as-art philosophy since arriving in London in 1996 but now finds himself swimming against the current because of the influence money has on the game. Nowhere is this more evident than in the English Premier League, where Wenger’s Arsenal, a club still run on sound financial principles, is fighting tooth and nail to compete at the top.

Soccer has been dying a slow death in England, where it was born in the mid-19th century. Players live off massively inflated wages while showing off even more inflated egos. To keep the stars happy, directors hike up the cost of tickets and push team merchandise like traders at a Marrakesh bazaar in the hope of containing their spiraling debt. However, this was a landmark year for the Premier League — the world’s richest and most popular league — as for the first time since it was founded in 1992, one of its clubs, Portsmouth, went into financial administration after racking up debts of more than 60 million euros. Several other clubs, including powerhouses like Manchester United and Liverpool are threatened by financial ruin.

This has highlighted what a folly it was to allow soccer in England to become purely commercially driven, looking for its next fat TV contract like a deadbeat junkie looks for his fix, while providing such scant regulation that one questionable businessman after another could buy a club and milk the round-the-clock publicity the sport now commands. The total debt of Premier League teams is some 4 billion euros — more than 1 percent of what Greece owes as a country and greater than that of the rest of Europe’s top-flight clubs put together. Greece’s soccer and basketball clubs owe a combined total of 222 million euros.

Having seen this model of concentrated capitalism fail, English soccer fans, many of whom have been priced out of the game, are crying out for soccer to be rescued. Ahead of the May 6 general election, the Labour government has proposed introducing stricter regulation and a rule that fans must own at least 25 percent of each club. Similar schemes operate in Spain and Germany. “I think it is a great idea… that the supporters invest in a club because they at the end of the day defend a club’s identity,” said Michel Platini, the president of UEFA, European soccer’s governing body.

There is, however, a major flaw in the supporter ownership argument: When a bus is being driven badly, you don’t necessarily want the passengers to drive it instead. Perhaps the only people less suited to running a soccer club than attention-seeking chairmen are the supporters — grown adults who lose all sense of perspective when it comes to matters concerning their team. Fans, especially the recent generation of English ones who have been brought up on the “spend, spend, spend” philosophy, will not necessarily be the wisest custodians of their clubs.

Soccer in England used to be about what Platini terms “identity.” It was about local people following their local team. It was about the club being a fulcrum of social activity, a unifying force in small communities and large cities. But the unquenchable thirst for success and greater spending has destroyed much of this. Reintroducing fans into the decision-making process will not — on its own — fix all this.

In Greece, 10 percent of a club’s shares must be owned by its amateur arm but this in effect does little to give supporters a stake in the administration of their team since it’s the all-powerful fan clubs, which are feted by chairmen, that exercise all the influence. One exception is Thessaloniki club Aris, where fans now hold a majority stake.

Even in Spain, where giants like Real Madrid and Barcelona are owned by thousands of members, the formula is not necessarily more successful. For example, the election of the Barcelona president by 170,000 members, or socios, sounds like a wonderful exercise in democracy but these polls are often plagued by local politics and economic interests. Both of these clubs spend extravagantly and are heavily in debt — Barcelona owes some 350 million euros and Real about 700 million. They only keep from being dragged under because of the influence they hold over banks and local authorities in their cities. A number of top-flight and lower-division Spanish clubs are now struggling with their finances and players are threatening to strike next weekend after seeing several of their colleagues go unpaid.

Spain’s example underlines that fan ownership must be accompanied by a framework which ensures clubs are treated as institutions that exist for social benefit, not short-term glory. Germany has struck on a much sounder formula where members must own 50 percent of the soccer club but also have an extra vote (known as the 50+1 model) that prevents private investors, including wealthy foreigners, from taking over. Rather than owners, these members are the administrators of the club, running it for the benefit of all its supporters and the local community. There is full transparency and elections are held to appoint the executive board.

Crucially, soccer authorities have much greater powers of oversight in Germany than they do in England or Spain. Clubs must submit information about their budgets and prove that their finances are in order to be allowed to compete in the league. They are also inspected during the season and can lose their licenses if they do not comply.

The system is not without its critics, especially those who feel German clubs are not competing on a level playing field in European competition. But the decision not to pursue success at all costs is actually what has brought soccer in Germany much closer to the true essence of the sport: Fans have a greater stake in the sensible management of their clubs, which in turn provide great stadiums at affordable prices and a good standard of play on the field. Under these circumstances, clubs can be the beating hearts of their communities — hearts which the fans have an incentive to keep ticking healthily.

Watching your team play in the knowledge that it has not sold its soul is worth more to genuine supporters than any trophy could ever be. It is always much easier to appreciate art when there isn’t a price tag obscuring your view. Hopefully, the pressures of the economic crisis will open the eyes and minds of administrators, owners and shortsighted fans, otherwise when the money has disappeared, only the game’s true believers will be left.

This commentary was written by Nick Malkoutzis and appeared in Athens Plus on April 9.