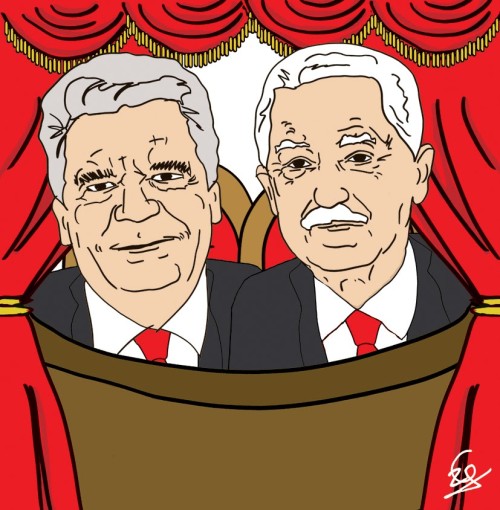 Who says politics has become a young man’s game? At a time when pension reforms are causing retirement ages to creep upward across Europe, it seems that politicians who may have been facing the twilight of their career are finding a new lease of life and the drive to discover a fresh relevance.

On Sunday, amid an avalanche of goals at the World Cup and the conclusion of New Democracy’s congress in Neo Faliro, it went somewhat unnoticed that a group of just over 500 people gathered in an Athens hotel to launch a new political party, Democratic Left, which will have as its figurehead 61-year-old Fotis Kouvelis. The new grouping has been formed by disgruntled members and supporters of the Coalition of the Radical Left (SYRIZA). In early June, Kouvelis led a breakaway group of four MPs, and members of the so-called “renewal wing” of Synaspismos, the largest party in the SYRIZA coalition. Kouvelis expressed a deep dissatisfaction with the line SYRIZA has been taking and by the apparent short-termism of its young leader, Alexis Tsipras.

Kouvelis was soundly beaten by Tsipras in 2008 when he stood for the SYRIZA leadership. Then it seemed that Tsipras, in his mid-30s, was the sort of new breed of politician that Greece needed – young, enthusiastic and free of the ideological burdens that had accumulated in the baggage carried by the country’s political elite. But his star seems to have been extinguished as quickly as it was catapulted over the Greek political landscape. SYRIZA’s share of the vote dropped to 4.6 percent at the last general election in the wake of Tsipras adopting an equivocal stance on rioting and a firm stand against the European Union.

The breaking point for Kouvelis and his friends seems to have come in SYRIZA’s inability to strike a coherent, realistic approach to the economic crisis and its concomitant effects on Greece. In his scramble to find a position, Tsipras began to resemble a high school pupil guessing for the right answer to the wrong multiple choice question. Under his leadership, SYRIZA’s buzzword, much like the Communist Party, has become “resistance.” But it became clear to Kouvelis that when you push against something that ceases to be there because reality has changed, you fall flat on your face.

“We want a left that is daring, which does not settle for the easy option nor make concessions to popular or short-sighted leftism,” Kouvelis said on Sunday. “We went a left that does not feel it is legitimate to defend all workers’ established rights nor to pander to unions and associations for petty political gains.”

The veteran politician, who briefly served as justice minister in 1989 and has a history in leftist politics that stretches back to the pre-junta era, also made it clear that his new party seeks a closer, not more distant, relationship with Europe. “The economic crisis and the threat to the euro make more Europe necessary: We need a closer union and economic governance,” he said.

There are some 50 leftist political parties in Greece, so if Kouvelis’s timely and carefully weighted words are to be more than just pleasant musings on the country’s predicament, the Democratic Left will have to give voters who are lost between PASOK’s lack of conviction and SYRIZA’s lack of awareness something they can latch onto. Kouvelis also said that environmentalism will play a significant role in the party’s policies, perhaps presaging a cooperation with the Ecologist Greens, who were just 0.5 percent short of 3 percent needed for them to gain seats in Parliament in last year’s general election. If Democratic Left can attract support from all these different sources, then it could be looking at a share of the vote at the next poll that would give it double-digit seats in Parliament and a potential say in the formation of the government.

Bearing in mind that New Democracy’s ousted MP Dora Bakoyannis could soon set up her own centrist party as well, Kouvelis could be one of the draftsmen of Greece’s changing political architecture. But all that is still a long way off and will depend to a great extent on whether the gamble of placing Kouvelis – a respectable but hardly inspiring politician who looks rather fatigued after years of public service – in the frontline will pay off. Democratic Left is banking on the crisis fueling the feelings of frustration with politicians who cast themselves as modern-day managers but who manage to do nothing but squander the faith placed in them. This exasperation means that figures of trust – politicians who have stood the test of time and retained their integrity – are a rare and valued commodity.

The appeal of public figures that command respect was evident in Germany’s presidential contest, where the 70-year-old civil rights-campaigning pastor Joachim Gauck had been outpacing conservative Chancellor Angela Merkel’s candidate, the 51-year-old Lower Saxony state premier Christian Wulff, in opinion polls ahead of Wednesday’s vote. Gauck, dubbed “Grandpa Obama,” forced an unexpected third ballot in the 1,244-seat federal assembly before Wulff was declared the winner (there is no public vote to decide who fills the largely ceremonial role).

The decision of the opposition, center-left Social Democrats (SPD) and the Greens to pick Gauck, who was responsible after the fall of the Berlin Wall for exposing many crimes committed by the East German secret police, as their candidate says much about where politics in Germany and in Europe as a whole finds itself. It’s an indication that level-headedness is now a more useful political virtue than it has been for a long time.

“It’s so wonderful that we have you,” Merkel told Gauck at his recent birthday celebration, “because when you see a wound you always put your finger on it.” In fact, Gauck proved that his finger was on the pulse of German society. “We are at a crossroads in Germany,” he said. “There’s a deep-seated sense of anxiety right now, and we need a new impetus. I notice that people aren’t just interested in consumption and soccer, they also want to be able to believe in people and institutions again.”

Gauck described himself as a “leftist liberal conservative,” reflecting a growing sense that in the current climate strict adherence to a single ideology will simply put up more barriers rather than help overcome obstacles. Kouvelis and his friends similarly seem to have rejected dogmatism in favor of pragmatism and their success or failure may depend on whether this is a switch of convenience or conviction. Gauck perfectly summed up the challenge facing today’s policy makers when he said: “The German people have a deep longing for credibility in politics.” Ultimately, if they are going to make a difference, it is this credibility that politicians must discover, regardless of whether they are young or old.

This commentary was written by Nick Malkoutzis and was published in Athens Plus on July 2, 2010.