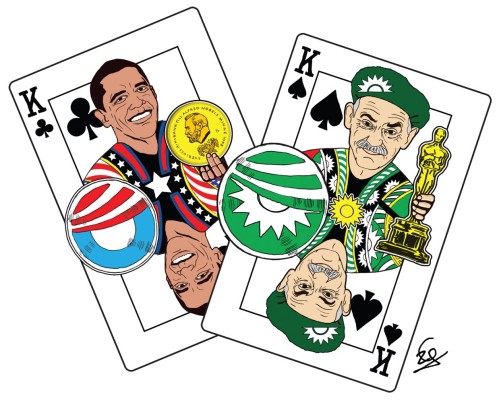 A man who knew what power words can have, 18th-century English author Samuel Johnson, said: “As I know more of mankind I expect less of them, and am ready now to call a man a good man, upon easier terms than I was formerly.”

Coming 300 years after Johnson’s birth, the awarding of the Nobel Peace Prize to US President Barack Obama confirms the potency of words and is evidence of a global society, which, after enduring demoralizing disappointments, is willing to embrace someone whose intentions are good even if he’s done little to back them up.

Similarly, in our corner of the world, Prime Minister George Papandreou is riding a wave of popularity thanks to the energetic manner in which he has approached the task of transforming Greece – but mainly because of the poor performance of the previous government.

The Nobel committee’s surprising announcement last week has provoked real debate around the world. In Europe, the reaction has ranged from mild surprise to concern that this will place an extra burden on Obama’s shoulders. In the United States, it was difficult to find anything but disbelief and derision.

“A Nobel for nothing,” said the Washington Times in its editorial; “A wicked and ignorant award” was Peggy Noonan’s take in The Wall Street Journal; and “A Nobel Prize for Moral Posturing” was the title of an article by Robert Tracinski, the editor of the Intellectual Activist and TIADaily.com.

Worse was to come for Obama when the political satirists and talk show hosts got hold of the news. Obama is already becoming a figure of fun among not just right-wingers but comedians as well, who prey on his inability to live up to the great expectations he created. “That’s pretty amazing, Obama winning the Nobel Peace Prize,” said Jay Leno. “Ironically, his biggest accomplishment as president so far: winning the Nobel Peace Prize.”

These are questions Greeks should be considering at the moment. As Papandreou prepares to unveil his government’s policy program, voters must think about whether the PASOK leader should be applauded for his lofty ambitions or whether praise should be put on hold until at least of some of these goals are achieved.

There’s a fine balancing act involved here. Clearly, actions are ultimately what counts but they’re not enough on their own. Papandreou must set out bold intentions because it’s the only way he can unite people behind a common goal and it provides the measure by which the electorate can later judge him and his government.

To what extent we buy into these aspirations is what will determine our reaction when they’re not met. But that’s exactly the issue – we know they will not be met, at least not in full. Yet, like so many American columnists in recent days, when we experience reality getting in the way of political dreams, we react like a consumer who gets home and realizes that the plasma TV he bought is actually the screen for a shadow puppet theater.

Criticism of our politicians is a necessary part of our democratic system – its lifeblood, in fact – but accusing them of being false prophets is a bit rich, given that voters – not to mention the media – are now as savvy at political games as the men and women who play them.

If Papandreou’s ambitious agenda turns out to be a big act and the only award he’s in contention for is an Oscar for his acting ability, then he should be criticized. But those who take on this task while claiming their hopes have been shattered will be hypocrites, because we all know that these are expectations, as Johnson wrote, “created not but reason, but by desire” and which require “the common course of things to be changed, and the general rules of action to be broken.” We have come to expect some pandering and play-acting from our politicians. It needn’t be part of our repertoire.

“I know not any thing more pleasant, or more instructive, than to compare experience with expectation, or to register from time to time the difference between idea and reality,” wrote Johnson. “It is by this kind of observation that we grow daily less liable to be disappointed.”

It might be wise to heed his words, even if there is no award for doing so.

This commentary was written by Nick Malkoutzis and first appeared in Athens Plus on October 16, 2009