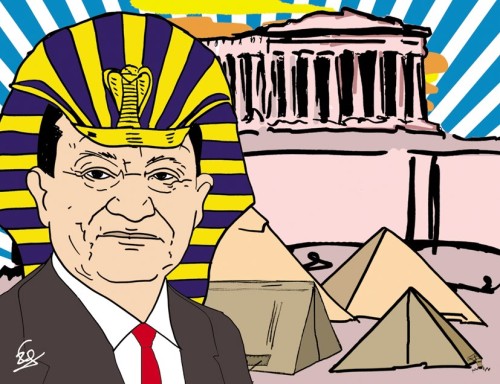 It is with the same sense of guilt that a parent feels when a child slips out of their grasp in a crowd that Greeks, like other Europeans, have been watching events in Tunisia, Egypt, Yemen, Jordan and Algeria unfold over the past few weeks. Shudders were sent down millions of spines with the realization that under our noses so many people were living in poverty and oppression created by duplicitous regimes willing to exploit them.

For Greeks, though, the surprise shouldn’t have been so great because they have discovered firsthand how many in authority will not think twice about casting destitute people like chaff into the wind to advance their own causes. If nothing else, the debacle surrounding the brief sit-in protest by North African migrants at Athens University’s Law School has taught us just how easy it is for the weak to be manipulated right under our very noses.

There is no doubt that the organized transfer of the 237 immigrants from Crete to the Law School a couple of weeks ago was misconceived on a grand scale. Campaigners who helped the migrants board a ferry and then moved them onto the campus did so in order to promote what they billed as “the largest mass hunger strike in Europe.” Right from the beginning, the whole event took on the air of a very badly run circus.

The protest’s organizers’ were apoplectic that the media did not focus on the fact the migrants were on hunger strike but instead insisted on paying greater attention to questions about whether the university asylum law was being abused. It was like a chemistry student being upset nobody could see the genius in his experiment when it had just blown a great big hole in the lab.

Those who backed, and actively aided the migrants in their campaign — a cross section of people including students, journalists, lawyers and human rights campaigners — should have been savvy enough to realize that by staging the hunger strike on university grounds, they were undermining any message they wanted to get across.

They gave politicians of various hues the burst of oxygen they needed to reignite the debate about whether the law that places strict limitations on when police can enter university grounds should be scrapped. Pumped full of opportunism, members of New Democracy, the Popular Orthodox Rally (LAOS) and even governing PASOK sought to identify with a public that has started to lose its appetite for the asylum rule, a remnant of the post-junta era. The MPs showed that two can play at the exploitation game — if the activists could use the migrants as a vehicle to highlight the government’s failings, then there was no reason why politicians could not use the protest to give them a leg up onto the popularity bandwagon.

The opposition leaders and deputies chided the migrants and their supporters for daring to bring an issue as base as immigration policy into the sacrosanct corridors of Greek academia. How dare these foreign laborers and the woolly liberals supporting them transform a Law School auditorium into a political bear pit? they asked. Of course, they conveniently overlooked what has been going on at Greek universities for the last 30 years. They chose not to mention how many academic appointments during that time have been politically motivated, they opted not to talk about how many technical colleges (TEI) and university departments have been built in far-flung parts of Greece simply because the government or minister at the time was fulfilling a favor to a local community and they decided to overlook the behavior of their own student groups, which tempt members to join with free drinks and club nights and have led to university life becoming politicized to a self-destructive degree.

Make no mistake, there has been hypocrisy on all sides over the last couple of weeks. But then again, there always is when there are weaker people to be exploited. The real tragedy, though, is that a vital message has not been heard because of this. The 237 migrants, half of whom are now living like metropolitan Bedouins in tents pitched up in the backyard of a listed building, had been working legally in Greece for the past few years. But now, like many Greeks, they are the victims of the economic crisis. Their work has dried up and they do not have enough social insurance credits to receive unemployment benefits or to renew their residence permits. The security they once had in Greece has disappeared and, as we have discovered by watching events across North Africa over the past few days, there is precious little for them to return home to. They are stuck in a purgatory where their screams for help cannot be heard because everyone else is shouting over them.

The fate of tens of thousands of economic migrants who have been left on the edge of a precipice is too important an issue to be relegated to publicity stunts and slanging matches. Greece has to decide whether, given the current economic climate, it is willing to cut any slack for people who were until recently legal residents here. It has chosen, for instance, to go easy on Greeks who owe money to the state, so, some might argue, why not relax the criteria for people who need to renew their residence permits? If not, then can the country get help from the European Union to help repatriate migrants following the success of the pilot schemes that were launched last year?

That’s the thing about economic migrants — you don’t have to dress up their story. You don’t need to stage a media event to turn them into causes celebres or martyrs because they’re heroes already. It takes guts to leave everything you have behind to pursue a life in a land where you don’t know anyone and you start with nothing. Greeks are very familiar with this type of heroism because they embodied it in the 1940s, 50s and 60s. Stoking their anger will not achieve anything, rekindling their compassion might. Greeks need to be reminded there are destitute people susceptible to all kinds of abuse and manipulation living right under their noses, not just in TV footage from Tahrir Square in Cairo, and that during these extraordinary times, these people have a right to know, like their brothers back home, that someone is willing to stand by them.