Consensus, conviction and the anti-racism bill 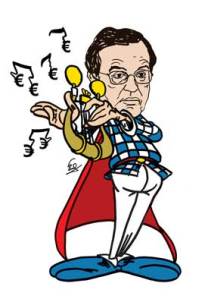 It was fitting that a debate about the late British Prime Prime Minister Margaret Thatcher was being held on Monday night in Athens at the same time as Greece’s three coalition leaders were trying to reach a compromise over an anti-racism bill. Since Thatcher was a self-professed opponent of consensus and saw herself as a “conviction politician,” she may have been smiling down as the heads of the tripartite government failed to find common ground.

Prime Minister Antonis Samaras certainly presented himself as a leader with convictions when he took over New Democracy following the party’s disastrous showing in the 2009 general elections. Although less than four years have passed since then, it seems like light years away. Samaras has since had to shed many of his convictions, going from anti-memorandum crusader, to peacemaker with the troika and now standard bearer for fiscal adjustment. Greece’s economic plight and the endless capacity for the country’s substandard political system to tie itself into knots led the conservative leader down the path of compromise. Here, perhaps Thatcher’s statement that compromise “seems to be the process of abandoning all beliefs, principles, values and policies” is particularly apt.

There is, however, one thing that Samaras did not abandon, which is his apparent persuasion that New Democracy, and perhaps Greece, can be revived by appealing to the conservative streak that runs through the country. Faithfulness to tradition, religion, the nation and the armed forces are notions that can rally Greeks and unite enough of the population behind a cause to follow, Samaras seems to believe.