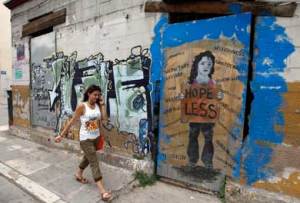 Fear is a sentiment that Greeks have learned to live with over the past couple of years. As the thread by which the country hangs grows ever thinner, fear has begun to pervade all aspects of life. It is so prevalent and has been lingering for so long that most people have become desensitized, blocking from their minds the worst scenarios that could lie ahead.

Every now and then, though, there is a jolt to the system that reminds us of how precarious Greece’s situation is and how there are about 11 million people clinging to this fraying thread, hoping that it will somehow repair itself before it snaps and they are cast into the dark valley below.

This week, there have been plenty of reminders of just how close the abyss is. Perhaps the most shocking came on Tuesday when during a Skai TV report about drugs shortages, a woman’s cries could be heard from inside a pharmacy. “Where am I going to find my medication?” she screamed with a fear that pierced through the shield of inurement that Greeks drag along with them wherever they go these days.

END_OF_DOCUMENT_TOKEN_TO_BE_REPLACED 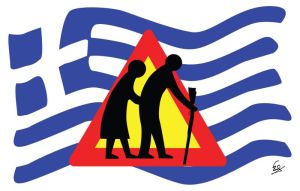 There are many ways one can look upon Dimitris Christoulas’s decision to end his life in front of Parliament on Wednesday. Each has a different interpretation, each has different implications, but no matter which one you choose, they will all fill you with sorrow.

On a personal level, it is a tragedy that a 77-year-old man should feel so discouraged by what he saw around him, so appalled by his own financial misfortune and the prospect of scrounging from garbage cans to survive, that he should choose to shoot himself in the center of Athens.

One can feel nothing but despair that an active member of his community should feel so alone that he should opt to exit society in such a dramatic way. It tells us of the isolation and hopelessness that many around us feel. Lest we forget, it brings us face to face with the impact of the crisis and the flawed economic polices it has spawned. We see more clearly the people who have lost their jobs, businesses, homes and aspirations. It reminds us that the human cost of the so-called fiscal adjustment makes debates about the political cost irrelevant.

END_OF_DOCUMENT_TOKEN_TO_BE_REPLACED

Is immigration a bigger issue for Greece than the economy?

Judging by the content of the debate in Greece over the past few days, one might think that the most pressing issue facing the country ahead of the upcoming general elections is illegal immigration rather than the economy. The two coalition partners, New Democracy and PASOK, have attempted to outdo each other by trying to appear determined to tackle a matter to which the crisis has lent extra weight.

With elections probably due to take place on May 6, Greece’s two main political parties have stepped up the rhetoric. New Democracy leader Antonis Samaras wants to repeal the citizenship law passed by the PASOK government in 2010. The law allows second-generation immigrants whose parents have been living in Greece legally to apply for Greek citizenship. Despite the fact that only a few thousand people, mostly ethnic Greeks, have taken advantage of the law, New Democracy insists it is a magnet for undocumented migrants who see it as an opportunity to obtain legal status in a European Union country.

“Our cities have been taken over by illegal immigrants, we have to reclaim them,” Samaras told members of his party on Thursday, as police conducted sweep operation in downtown Athens. Samaras’s comments are typical of the kind of language that is fueling the surge of populism threatening to overwhelm any constructive attempts to deal with the issue.

END_OF_DOCUMENT_TOKEN_TO_BE_REPLACED

For whom the drum rolls

Children around Greece are pacing up and down their schoolyards banging drums in preparation for the March 25 Independence Day parades. What could be more dramatic ahead of a day likely to be marked by vehement protest against the political system and the austerity measures it’s applying than a loud drumroll?

For some Greeks, March 25 is building up to be a moment to express disapproval of everything their politicians have come to represent. For others, it will be an opportunity to release their anger by hurling yogurt and abuse at their political representatives. Some will just be gripped by the fear that it could all get out of hand and rip the fragile fabric of Greek society.

END_OF_DOCUMENT_TOKEN_TO_BE_REPLACED

Greece and the euro: The end of the affair 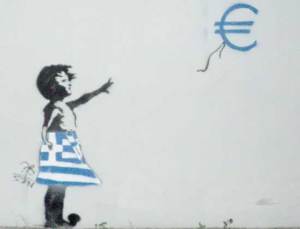 A few weeks ago, I was interviewed by a Danish journalist in front of Parliament. He took out a 2-euro coin, flipped it over and showed me the engraving depicting the mythological story of Europa being whisked off by Zeus, who transformed himself into a bull to achieve the task. It’s a scene that is usually known as the seduction, or even abduction, of Europa. “This coin shows the Rape of Europa,” the journalist said. “Do you think Greece is raping Europe or is Europe raping Greece?”

After picking up my jaw from the floor, I gave an inadequate answer about Europe and Greece having a consensual relationship that was going through a rough patch. “We knew all about each other when we climbed into bed together,” was my final repost to his jarring question. Of course, the truth is that seduction only really works when you don’t know all about each other. And, as we’ve discovered over the last few months, Greece knew little about itself, let alone about Europe, before becoming part of the euro.