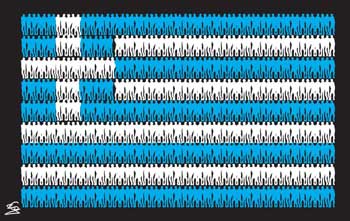 Greece’s first major privatization since the crisis began, secured on Wednesday when a private consortium agreed to buy a 33 percent stake in state gambling monopoly OPAP, will bring some relief to the government and its lenders. Athens has been under pressure since the start of its bailout program three years ago to sell state assets so it could raise revenue and pay off some of its mounting debt. Privatization even caused the first major rift between the troika and Greece, when the country’s lenders announced a 50-billion-euro sell-off program in February 2011 before the government.

The target for privatization revenues has since been revised downwards, first to 19 billion euros and then 11 billion euros by 2015. The pressure, however, has not decreased. The sale of the stake in OPAP to Emma Delta for a total of 712 million euros will give the Greek government some breathing space but the troika expects to see more sell-offs soon as more than 2 billion has to be raised this year.

Much has been made of how Greece has dragged its feet, failing to kickstart the privatization process quickly enough. The country’s privatization agency (HRADF) has also been slammed for lacking organization, with one analyst recently labeling its efforts as “simply not up to par on any international standards.” The fund has also been blighted by several changes of leadership.

The criticism of Greece’s efforts has been largely valid but this doesn’t mitigate the fact that it has been trying to sell in a buyer’s market. The overall European and global economic climate cannot be ignored. Greece has few truly desirable public assets and finding the right price and the appropriate bidder is a challenge that has proved mostly beyond its capabilities. Although, the government will laud the OPAP deal and hold it up as a sign that foreign investors are beginning to believe in Greece, it should not be forgotten there were only two final bids for Greece’s most profitable company and that one of these was deemed invalid. The sale of OPAP was more a case of stumbling over the finishing line than smashing through the tape.

Opposition parties have already lambasted the government for the sale, arguing the family silver is being sold off on the cheap. Despite a dip last year, the company earned revenues of almost 4 billion euros, made a profit of 505 million euros and a return on equity of almost 50 percent. Emma Delta stands to make back its initial investment within a few years, which represents a tidy but of business for the consortium. Not so clever for the Greek taxpayer, critics argue.

The government, however, will point to the fact that public coffers will benefit from its decision to increase tax on gross gaming revenue to 30 percent from this year. It will also refer dissenters to Deutsche Bank and National Bank, the main sale advisers for the OPAP deal, who valued the stake in the gambling company at 610 million euros.

This is not just about numbers, though. The government will have greater difficulty in fending off its detractors over less tangible issues. One of the other aims of the privatization program was to bring in foreign acumen to shake up the existing way of doing things and to introduce a new code of ethics to smash the often less-than-virtuous cycle between the state and the private sector. Emma Delta consists of an array of established Greek businessmen and Russian, Czech and Slovak investment funds. It is hard to imagine that their involvement heralds a brave new era for business practices in Greece. Maybe those behind Emma Delta and other investors that are to follow will overturn this impression.

Until then, doubts will continue to niggle, as will skepticism about the ultimate goal of this privatization program. As has been the case with most of what has been done in Greece over the past 3 years, the sell-off scheme appears to me motivated by little more than the need to raise revenues or cut costs. The government has certainly not sold it to the public as part of a vision of a better, more secure Greece. Perhaps, though, it would be foolish to even try. After all, Greeks need only look to their Portuguese partners-in-austerity to realize that privatization is no panacea. Between 1996 and 2000, Portugal raised the equivalent of 15.7 percent of GDP from sell-offs. It was the biggest ever privatization intake by a developed country. Today, Portugal finds itself in a similar position to Greece: trying to attract bids for what saleable assets it can scramble to find.

There is another lesson to take from history, though. While many will attribute Greece’s amateurishness in handling the sale of state assets to its reluctance and inexperience, the truth is that the country has had 180 years of experience of doing exactly this.

Greece is anomalous in comparison to its eurozone partners because the state still owns a lot of assets, particularly real estate. This is chiefly the legacy of its Ottoman occupation. The Ottomans did not want private ownership to become widespread because they feared pockets of power and resistance to the Empire building up. Greece’s first governor, Ioannis Kapodistrias, identified this as a problem and envisioned Greece becoming a country of small land-owning farmers that would help boost the economy. He never got to test his theory as he was assassinated in 1831. Bavarian prince Otto, was appointed King of Greece by the Great Powers and two years later he launched a scheme to sell public land. Otto and his regents were motivated by a completely different goal to Kapodistrias: they sought to replenish empty Greek coffers so a foreign loan could be paid off. In looking for quick returns, Otto alienated most locals and land ended up being bought by the wealthy few or grabbed illegally.

As was the case then, so now the end and the means are inextricably linked. A scheme that is driven by short-term needs and not guided by long-term goals is condemned to securing only limited achievements.