Greece and the IMF: Three years of not understanding each other 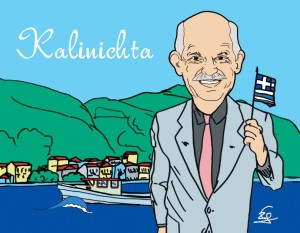 Three years ago, then Prime Minister George Papandreou stood on Kastelorizo’s harbor as the Aegean glistened in the background and children yelped with joy. The ensuing period has proved anything but sun-kissed child’s play for Greece. The appeal made by Papandreou to the eurozone and the International Monetary Fund that day has set the tone for almost everything that has happened in Greece over the past three years. Where it will lead is far from clear.

Even though the European Commission, the European Central Bank and the IMF make up the troika of lenders that have provided Greece with some 200 billion euros in bailout funding during the last 36 months, the Washington-based organization’s role has grabbed the attention of most Greeks. Even now, April 23, 2010 is referred to by many as the day Papandreou “sent Greece to the IMF.” Even though the Fund has provided only a fraction of the loans disbursed so far, its actions often come under the greatest scrutiny. Although there has been a growing realization that some of Greece’s partners in the eurozone and the ECB have been behind some of the troika’s toughest demands, the IMF continues to be a regular target for critics.

The problem is that these often indiscriminate attacks, dismissing the IMF as a Trojan horse for neoliberalism, mean that proper analysis of the troika’s three elements is pushed aside. In this fog, it has become difficult to work out where there are grounds for genuine criticism of the IMF. In this respect, an op-ed by Mohamed El-Erian, the CEO of PIMCO investment firm, on the Fund’s shortcomings is timely and extremely useful.

“The IMF is not one, but rather, two institutions: a highly respected analytical outfit anchored by superb technocrats and delivering world-class insights; and an inconsistent operator that frequently falls hostage to pressure from its political masters in advanced economies and thus fails to deliver on its promises,” he wrote last week.

El-Erian stresses that the IMF’s key weakness has been its susceptibility to political manipulation. “Repeatedly over the last three years, the IMF has been pressured to participate in programs for struggling European economies that are inadequately designed, poorly monitored, and insufficiently financed,” he wrote. “Unsurprisingly, outcomes have fallen short of what was promised to citizens. Understandably, many have started to see the IMF not as part of the solution but, rather, as part of the problem.”

The PIMCO chief is also critical of the Fund’s role in the Cyprus bailout. El-Erian’s firm was responsible for auditing Cypriot banks ahead of the loan package being agreed between Nicosia and the troika. He said the aborted initial solution and the revised plan showed “insufficient understanding and analysis of the complexities of the country’s problems.”

“In both cases, and in other similar circumstances elsewhere in Europe (including Greece), I suspect that the IMF felt it had no choice but to succumb to pressure by European politicians,” added El-Erian. “But in doing so, it has risked more than its credibility and standing.”

These are all issues – particularly the matter of credibility – that are picked up on by Gabriel Sterne, chief economist at Exotix. Sterne, a former IMF employee, last week published what is probably the most comprehensive assessment of where the Fund has got it wrong over the last three years. His policy discussion paper has some extremely salient points for Greece.

Sterne begins by pointing out that the IMF’s analysis, which El-Erian correctly lauded, has been somewhat off target in Greece’s case. “The Fund has so far revised down its projections for the level of Greek GDP a mind-boggling 22 percent in just 18 months – an error that makes it impossible to make a fist of the medium-term budgeting adjustment that is central to stabilizing Greece,” he wrote.

“Greece has endured the largest but by no means the only forecast errors; errors which can be explained by the dismal algebra of credit crunch + austerity = output collapse,” added Sterne, underlining the fact that the Greek program has not just gone awry because of what has or hasn’t happened in Athens over the last three years.

The troika persistently argues that the slow pace of reforms has been at fault for the deeper-than-expected recession, while consistently sidestepping questions about whether the rapid pace of fiscal adjustment has pulled the rug from under the Greek economy.

Sterne argues that a failure to address Greece’s towering public debt from the start has proved a damaging miscalculation and one not in keeping with the IMF’s credo. Soon after Papandreou’s Kastelorizo speech, the IMF projected that Greek debt would reach 139 percent by the end of 2011, but by the time of the troika’s fifth quarterly review, Greek debt had reached 160 percent of GDP, despite the fact that more than 100 billion euros in loans had been disbursed.

“There is a strong case to be made that the bailout, by prolonging the crisis without taking firm action, did more harm than good and an equally strong case that this was to be expected,” wrote Sterne, adding that the Fund “broke one of its most essential rules by supporting a program in Greece in May 2010 which was inadequate to secure sustainability.”

Greece and the troika would have been much better off biting the debt-restructuring bullet from the start rather than addressing the issue in 2012, the analyst argues. “An earlier restructuring would also have meant an earlier reduction in debt service payments, a lower fiscal deficit, a milder and shorter recession, less funds required to recapitalize banks, and a range of other indirect benefits,” he wrote.

Crucially, Sterne points out that some profited from the decision not to tackle Greek debt, much of which was in the hands of European banks, right from the start. “The biggest gainers amongst creditors were those in the private sector whose bonds matured between mid-2011 and January 2012. The official sector funding helped pay these out. Those creditors that sold on the secondary market during the period also benefited to the ultimately disastrous end game.”

The economist’s concluding verdict on the “pretend and extend” strategy that followed Papandreou’s speech is damning. “Ultimately, the Greek procrastination was fruitless. Private lenders to Greece suffered a scalping, Greece hasn’t had a bank that lends since mid-2011, youth unemployment is 60 percent and the ECB had to intervene massively to keep swathes of the European banking system afloat.”

Like El-Erian, Sterne says the IMF buckled in the face of political pressure from eurozone countries and made a series of diagnostic errors. He identifies a range of reforms that would improve the organization, introducing more effective checks and balances, as well as greater transparency.

Three years on from Kastelorizo, there is still much for Greece to do. It has executed the most dramatic fiscal adjustment in OECD history but some desperately needed reforms are still in the works. This, however, does not take away from the fact the Greek program was ill-conceived and badly implemented by all sides. In this respect, it is vital to understand the roles that each of the three elements in the troika have played and where their weaknesses and stubbornness may lie. Launching indiscriminate attacks on the IMF or the others simply allows the troika to hide behind the received wisdom that the program’s shortcomings were only down to Greece’s slow implementation. If we are going to come to terms with the legacy of the Kastelorizo speech, a more nuanced approach is needed.

39 responses to “Greece and the IMF: Three years of not understanding each other”