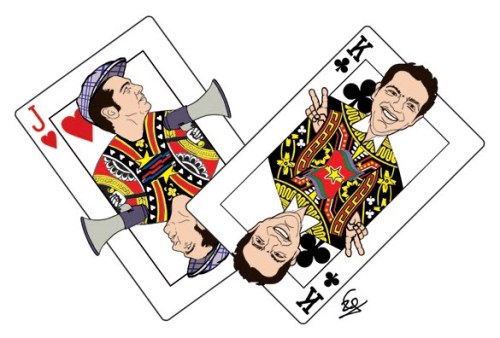 SYRIZA leader Alexis Tsipras is to attend the funeral of Venezuelan leader Hugo Chavez but this will not be his most significant political statement of the week or month. That came when he delivered a speech on Wednesday night at an event in Athens held to mark 15 years since the death of New Democracy founder and late Prime Minister Constantine Karamanlis.

In many European countries, a political leader from one ideological camp paying respects to the memory of a politician from the other side of the spectrum might not be particularly noteworthy. Tsipras’s address, though, broke several taboos in Greece.

Karamanlis has widely been acknowledged for his statesmanship in leading Greece from the pain of the dictatorship to the prosperity of European Union membership. But his prominent role during a turbulent period in Greek politics before the rise of the junta meant that many on the left had trouble accepting him as the national father figure (“ethnarhis”) others portrayed him to be. On the flip side, the Greek left has traditionally remained entrenched and introspective, largely as a result of the scars inflicted by civil war, persecution and the colonel’s regime. Even since the restoration of democracy in 1974, the left has rarely accepted any practical cooperation or ideological cross-pollination with the country’s right.

Beyond the ideological barriers to Tsipras’s appearance at the Constantine Karamanlis Foundation event, there was also the personal factor: The SYRIZA leader is seen as a young upstart by much of the current political elite, which started its rise to power in the years when the late ND leader steered the country back to stability. For instance, current Prime Minister Antonis Samaras, who also spoke at the function, was first elected to Parliament as a New Democracy MP in 1977. Tsipras’s often outspoken attacks on Samaras and his predecessor as ND leader Costas Karamanlis, nephew of Constantine, seemed to preclude the possibility of these men finding themselves in the same auditorium, praising the same political figure.

However, the Tsipras of the last few months is a different political entity to the one of previous years. With SYRIZA within touching distance of the kind of support that would make it the next government, the party’s leadership has sought to cultivate contacts with the pensive moderates that would bring the leftists an incredible electoral victory. Tsipras’s recent meetings with German Finance Minister Wolfgang Schaeuble, US officials and IMF representatives have been partly in this direction. This move has not met with universal approval within his party but Tsipras and his advisers are making a clear attempt to balance his image as a radical with a dose of realpolitik. The effort to connect this political yin and yang is what brought Tsipras to the Athens Concert Hall on Wednesday.

His speech was a skillful attempt to inch himself along the highwire over jagged terrain created by the shifting tectonic plates of Greek politics – a by-product of the economic crisis and the spectacular fall from grace of New Democracy and PASOK, in particular. Tsipras tried to endear himself to the compassionate conservatives while not alienating his leftist base. This involved a substantial amount of linguistic and ideological acrobatics on the SYRIZA leader’s part.

He began by establishing his leftist credentials, just in case there were any doubts. “I belong to those who believe that history is not written by individuals, as important as they may be, but by peoples and their struggles,” said Tsipras, echoing the Marxist principles he embraced during his political upbringing.

Having said that, though, Tsipras needed a reason to explain why a leftist leader would praise Greece’s most famous conservative. To bridge this gap, the SYRIZA chief called on the assistance of a previous Communist Party leader. “Some time ago, Harilaos Florakis had characterized Constantaine Karamanlis, while he was still alive, as an important leader of his class.” A Second World War resistance fighter, Florakis’s fidelity to the left is in no doubt and the fact, as Tsipras suggested, that he had praised Karamanlis while the conservative was alive gave the SYRIZA politician a free pass to laud his contributions to Greece 15 years after his death.

Tsipras said it would be useful to study Karamanlis with “less prejudice” and to appreciate the “extra step” that he took to bring calm to Greek society when it was in an extreme state of agitation. “All political forces have to preserve this extra step,” said Tsipras. It will not have been lost on his audience that Greece’s society is currently slipping toward a similar fragmentation, which no leader seems capable of preventing. If Tsipras is to be that politician then he too will have to go the extra mile to heal wounds.

The SYRIZA leader then made reference to his childhood and leftist upbringing, stressing that he was taught that the Karamanlis who returned from exile in Paris to Greece in 1974 (the year Tsipras was born) was a different man. By drawing the line at 1974, the leftist indicates a willingness to jettison the political emnity of the years that preceded that moment and build only on what was achieved after it.

“His contribution to the country managed at times to go beyond the boundaries of his ideology,” said Tsipras. “He managed with other party leaders to cement the culture of calm democratic exchange. It is a culture that we have to safeguard.” Again, the SYRIZA leader appeared to acknowledge that he will have to temper his rhetoric and rein in the more hardline elements within his party if he is going to be able to lead from the front.

In the next sentence, there was an indication that Tsipras is prepared to be more dialectic in his approach as he accepted that he was not “claiming the absolute historical truth” in his analysis of Karamanlis’s impact. This was a statement of some significance from Tsipras as he and his party have claimed the single truth on Greece’s economic plight and the failures of the EU-IMF program. The leftists have been stubborn to the point of brittleness on their interpretation of what went wrong and what is going wrong, often painting themselves into a corner from where their credibility seeped away.

Adroitly, Tsipras then used Karamanlis’s legacy to defend his own controversial positions on some issues. “He was never a passive receiver of orders,” said the SYRIZA leader. “He was radical in his conservativism,” he said, pointing out that Karamanlis withdrew Greece from military involvement in NATO in 1974 due to the occupation of Cyprus and between 1975 and 1977 nationalized several industries, “believing that this was in the best interests of the public.” It is no coincidence that Tsipras chose these two examples since SYRIZA has questioned Greece’s role in NATO and is opposed to the government’s privatization program. In essence, Tsipras was saying, “If Karamanlis supported these positions in difficult times, why am I wrong to do the same?” It is worth remembering, though, that both of these choices came at a cost. It could be argued that Greece continues to pay the price of stateism, in particular. Drawing parallels to Karamanlis does not guarantee Tsipras a free ride.

“He had understood that every major effort to change and reform can only start in the public sector and particularly from the public administration,” added Tsipras, who is in favor of Greece maintaining a strong and active state to drive economic growth. Again, the SYRIZA leader was suggesting that his choice is justified by the country’s history and by Karamanlis’s legacy.

Tsipras has also been outspoken about how corruption has blighted Greece, accusing the political, business and media elites of serving narrow interests. The leftist leader drew parallels between his stance and that of Karamanlis, who he said had “drawn clear lines of distinction between public interest against smaller and larger private interests.”

Concluding his speech, Tsipras attempted to be graceful to his hosts, saying that “even we leftists have many useful political messages” to learn from Karamanlis. But there was an inherent question in his final statement: “If we leftists take these messages on board, are you prepared to overcome your own ideological hang-ups to support us?”

It is this thought that Tsipras left hanging as he departed for Caracas. On his return, he is sure to continue his efforts to hold on to the left while trying to entice the moderates. In the process, he also has to lead his often confused and contradictory party on a journey of discovery during which it will overcome its fragmentation. His success or failure will define his political career and is likely to shape Greece’s near future.

While he is honing his skills with regard to attracting middle-ground voters, which he appears more convincing at as each day passes, Tsipras faces a severe risk. In his effort to cultivate new ties, he risks losing many of the people whose support he attracted over the past couple of years. The anti-memorandum rhetoric that he and others have engaged in has created a specific audience with particular demands and expectations. After all his efforts to appear more moderate, Tsipras may just find that there are more Greeks who want a Chavez than those who want a Karamanlis.