An underground resistance in Athens 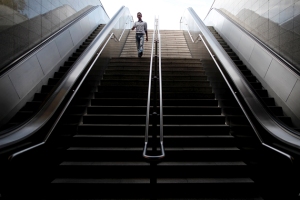 The Athens metro is one of the cleanest, safest, cheapest, fastest and most punctual subway systems anywhere in the world. It is a precision timepiece in a country full of malfunctioning cuckoo clocks.

Used by about 650,000 passengers a day and accommodating more than 400 million rides a year, it is the 31st busiest metro system internationally and one of the few shining legacies of the 2004 Olympics. The ability of the Athens metro to operate so smoothly below ground when there is such inefficiency above ground should be a source of fascination.

Such philosophical musings have been set aside for the time being, though, as the metro has become the battleground between striking employees and a government intent on reducing their wages as it creates a single pay structure for public sector employees. Stuck in the middle of this dispute are thousands of commuters: people who have lost their jobs over the last few years as well as others with jobs but whose wages have been slashed.

Each of these passengers, who have been scrambling to find alternative ways to go about their business for the last week or so, will have their own thoughts about the rights and wrongs of this standoff. Some will see it as the work of hardline unionists hellbent on causing political havoc, others as the result of an intractable government carrying out the failed policies of the EU-IMF memorandum.

As far as the government is concerned, it is reaping the turmoil of the inequalities sown by the country’s politicians over the past decades. The creation of a single wage structure within the civil service is perhaps one of the fairest reforms to arise from Greece’s commitments to its lenders as part of its EU-IMF bailout. It seeks to eradicate the disparities and pockets of largess that had been created within the public sector by politicians trading in favors. Rectifying this is equitable for those employed by the state but also those who fund it, taxpayers.

Decision makers are also paying the price for treating the civil service as a private club to which they could bring new members whenever they wanted. It has been well documented that the metro experienced a surge in its employee numbers, often in nontransparent circumstances, under the 2004-09 New Democracy government. The current administration is now trying to slash costs that were in some cases unnecessarily created by its predecessors.

However, as has been the case throughout this crisis, revenues are as much an issue as cost. As in other parts of the public sector, the government is now agonizing over ways to reduce expenses for the metro partly because it did not do enough to find ways to pay for them in the past. Since January 2000, when the first carriages started rolling on Lines 2 and 3, transport authorities have failed to produce a fare pricing policy to entice Athenians to use the metro in truly convincing numbers. For years now, weekly, monthly and annual travelcards have provided scant incentive for passengers who use the metro to commute only on weekdays.

There has also been a consistent failure to deal with fare dodging. It is ironic that Development Minister Costis Hatzidakis, who has the task of settling the current dispute, was also transport minister in the New Democracy government several years ago when a fancy scheme involving tickets with magnetic strips and scanners with alarms were to be fitted at metro stations to deter fare dodgers. The systems were never installed, neither were straightforward barriers and, to this day, an estimated 15 percent of passengers on the Athens metro fail to purchase a ticket. The public transport system in the Greek capital loses more than 30 million euros a year to fare dodging. It is by no means alone in this – London’s transit system, albeit much larger than the Greek capital, suffers for example estimated annual losses of 90 million euros. However, when one takes into account that the total annual reduction in metro workers’ wages, over which the current battle with the government is being fought, amounts to about 10 million euros, it’s clear that both sides would have benefited from more robust checks on passengers.

This, however, would also demand a display of responsibility from the unions. Had they complained as vociferously and doggedly as they are now about the failure to maximize the metro’s revenues and the appointment of staff in breach of hiring rules, perhaps the distance that the unions and the government need to cover would have been much smaller.

As things stand, unionists are demanding that there be no change to their collective contract, which expires in April, and that the government negotiate with them over a new pay deal. The government says it cannot delay applying the new public sector pay structure and on Thursday issued civil mobilization orders to force the striking workers to return.

The metro workers’ request that the government fulfill the terms of their current contract is by no means unreasonable but it has to be balanced against the lack of a commitment from employees so far to accept their induction into the unified pay scale, even in April, and that a court has ruled their rolling strikes illegal.

The backdrop to all this is the fact that the metro runs on public money. It is funded at both ends by taxpayers: those who buy its tickets and those who pay for its state subsidies. The Athens Urban Transport Organization (OASA) was showing an operational surplus halfway through last year due not only to employees’ wage reductions but also because state subsidies had increased. In 2011, OASA received 160 million euros of state funding. Of this, 28 million euros went to fixed-track operator STASY. The wage bill at STASY last year was 97.7 million euros, with the metro, which employs some 1,300 people, accounting for 48.1 million of this.

According to figures published by Kathimerini, the average wage for metro workers last year was about 2,500 euros per month gross, excluding overtime pay. Under the new pay scale, metro employees will earn an average of 2,038 euros per month – a reduction of almost 20 percent. Unions might argue that this figure is distorted by some very high wages, such as those that are reportedly earned by train drivers, but they should also be upfront about their part in allowing this distortion to develop.

Now, with the Greek state having to cut its cloth as demanded by the crisis and its lenders, the time has come to face up to the irresponsibility and unsustainability of the past. In a country where the minimum wage has been cut to 586 euros per month, the average wage is under 1,200 per month and where a quarter of the work force is unemployed, engaging in a rolling strike and speaking of “a war,” “degrading conditions,” “junta” and “dead bodies” when the average salary of those involved in the protest will remain above 2,000 euros and higher than other frontline public servants such as teachers, doctors, nursers and sanitation workers threatens to pierce the barriers of solidarity. The legitimacy and potency for such extreme action springs forth from the level of support it generates within society. Two weeks into the protest by metro and other transit workers, it is questionable how much understanding there will be among other Greeks for their cause.

The success of the Athens metro has been based on the hard work of its employees and the generosity of the Greek taxpayer over the years. It would be a crying shame for this relationship to suffer a massive derailment now.

5 responses to “An underground resistance in Athens”