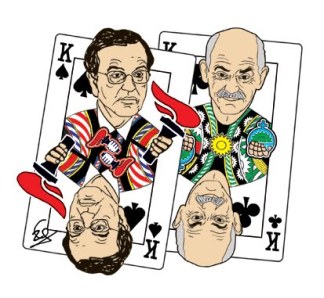 If you walk along Adrianou Street, which runs alongside the Acropolis, in Athens you can brighten up your stroll by taking in one of the games of three card monte that often takes place there. It’s entertaining to watch the dealers work with their shills to display wonderful sleight of hand and mesmerizing misdirection as they fool punters. But if confidence tricks are your thing, you might be better off walking a few hundred meters up the road and visiting Parliament because the street hustlers have nothing on Greece’s politicians

Samaras and Karatzaferis led the charge of the white knights who claimed to have ridden to the rescue of the embattled Greek citizen. Their argument was that through “tough negotiations” they had saved, or were on the way to saving, the 13th and 14th monthly salaries in the private sector. Papandreou, whose credibility has already been shot to pieces, maintained a lower profile, while Papademos – to his credit – refrained altogether from engaging in this poppycock.

In the more sobering light of a wintry Athens morning and if reports are accurate, claims that red lines were drawn and wages ringfenced are worth no more than claims by card dealers on Adrianou that their games are not rigged.

While the leaders of Greece’s three coalition parties did not agree to the scrapping of 13th and 14th monthly salaries in the private sector, it seems they did accept a substantial reduction to the minimum wage. According to reports, the minimum wage – which currently stands at 751 euros per month (gross) – is to be slashed by 20 to 22 percent.

The first thing to note is that this will lead to the minimum wage dropping to between 585 and 600 euros per month before tax, meaning that someone in work could be earning as little as 470 euros per month after tax. In cities like Athens and Thessaloniki, unless there is a shift in the cost of living, it’s highly questionable whether these will even be subsistence wages.

Beyond that, the reduction would mean that the minimum wage will drop close to the level of the monthly unemployment benefit of 461 euros that Greeks receive for the first year they are out of work. This means unemployment pay will also have to be reduced; otherwise there will be no incentive for those out of work to take jobs on or just above minimum pay. Some reports have suggested it will fall to 369 euros.

Then, there’s the issue of pensions. A downward shift in salary levels means that social security contributions will also decline and there’s little doubt that pension payments will also have to be adjusted to sustainable levels.

However, perhaps we could excuse all this for the sake of snatching those 13th and 14th monthly salaries from the jaws of the troika.  The fact they are paid in Easter, summer and Christmas does not make them holiday bonuses: these are about 15 percent of regular private sector salaries. So, surely safeguarding this chunk of Greeks’ wages and therefore preventing further damage to aggregate demand and exacerbating the recession is a true victory?

Here’s the problem, though. Private sector wages are regulated by the national collective contract agreed by labor unions and employers, or by sector-specific deals negotiated in the same way. Apart from the fact that the minimum wage provides the basis for the pay structure in these contracts (if the base drops by 20 percent, it stands to reason that everything else will drop by 20 percent as well), the deals remain in force even after they expire (metenergeia (continued effect) in Greek). So, if employers and unions fail to agree a new contract within six months of the previous one running out, the terms of the expired deal continue to apply.

What the party leaders are about to sign up to – again, if reports are correct – is the substantial reduction of the minimum wage and the abolition of the principle of metenergeia, or nachwirkung as its known in German law. In other words, if employers and unions manage to agree on new collective contracts, the baseline will be 20 percent lower than before, thereby affecting all the wage brackets above it. If the two sides don’t agree on new deals, employers will be free to negotiate individual deals with their employees. The basis for these agreements? The new, 20-percent-reduced, minimum wage.

While some of the political leaders will proclaim their role as saviors of Greeks’ hard-earned crusts by protecting the 13th and 14th salaries, it seems that all they have managed to achieve is swap a 15 percent reduction, which would have occurred if those monthly wages were lost, with a 20 percent one that will come with the slashing of the minimum wage and the terms under which collective contracts apply. Rather than two monthly salaries, Greek private sector workers are set to lose three.

The fact that some people are portraying this as a victory for their negotiating technique means that either they are woefully misinformed or, as is more likely, they are being intentionally duplicitous.

It’s too late for Greeks to do anything about this now. They are bound to pay for quite some time for the mistakes that they and the politicians they elected have made. The only thing they can do is make a mental record of the deception and recall that moment from the memory banks when they walk into voting booths at the next elections.

It was interesting, therefore, that Papandreou and Karatzaferis should both suggest that the term of Papademos’s administration, scheduled to end in April, might be extended even until 2013. After all, who out of the current crop of politicians would want to put themselves before the Greek public in the wake of such a cheap case of misdirection? Denying the public the chance to express its opinion on recent events would really complete the confidence trick.