A bite of the Apple 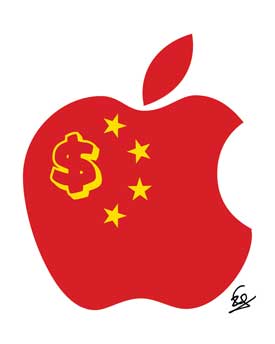 It’s always interesting to step back and try to work out what it is that makes otherwise calm and collected people suddenly lose their sense of proportion and temporarily mislay their faculties. The death of Apple co-founder Steve Jobs last week was one such moment. The outpouring of grief and praise that followed his sad demise is usually reserved for statesmen and do-gooders of the highest order. Although a supremely talented individual, Jobs was neither.

There was something unnerving about the fact that thousands of admirers, and bandwagon riders, heaped adulation on Steve Jobs the man because of the objects he helped create. Those who came to praise him will argue that Jobs changed the concept of computing, technology, marketing, business and, ultimately, how we live. It’s difficult to argue against that; Apple had a rare knack of inventing the future before its competitors and staking a claim to the most imaginative plots of thinking in our minds.

“By thinking differently and outside the box, he courageously changed the standards and the lives of millions of people,” Greek Prime Minister George Papandreou wrote about Steve Jobs following his death. Papandreou’s comment is as succinct and complimentary as any you will find about the late Californian. But it is also a prime example of the uncritical adulation that the Apple boss has received over the last days.

Papandreou, a known admirer of Apple products and with a keen interest in technological advances, tweeted his message about Steve Jobs on October 6. He received a torrent of abuse via Twitter from Greeks angry that their premier, who had not made a statement to the public for several weeks, should choose to share his thoughts about a foreign entrepreneur. “Why should Papandreou comment on the death of Steve Jobs when Greeks are losing their jobs?” was the gist of most complaints.

Papandreou’s message — the only one he tweeted for two days — stuck out like a Samsung tablet in a room full of iPads. It was a naive on his part, although representative of the comments that gushed forth from all corners of the world.

Perhaps more surprising than Papandreou’s miscalculation of the public mood was the premier’s decision to praise Jobs for changing people’s lives and their standards. Apple’s products have no doubt been the most audacious warriors in technology’s vanguard and have forged new boundaries of communication, but surely any concept of a better tomorrow, and therefore better lives or standards for the people that inhabit this planet, must be based on much deeper foundations.

Creating a world in which people receive a fair day’s wage for a fair day’s work, and are treated like human beings in the process, and ensuring that growth does not compromise environmental sustainability and public health must be two key tenets for a brighter future. Papandreou should understand this as well as anyone. After all, he is an advocate of “green growth” and it was under his leadership that PASOK developed the slogan “Putting the citizen first”. Yet if these are the yardsticks for judging how we shape the future, then Apple and Jobs fell well short.

While Apple in the US may be a model employer, many of its products are manufactured by electronics giant Foxconn in China. Working conditions at the factories that reportedly churn out more than 1 million iPads a month were first questioned last year after several employees committed suicide. A total of 14 workers, all aged under 25, died in 2010. Another four sustained serious injuries. Jobs admitted he was stumped by the deaths, saying that the factory he visited had “restaurants and movie theaters and hospitals and swimming pools. For a factory, it’s pretty nice.” Foxconn’s response was to install safety nets to prevent workers from jumping to their deaths.

It took a group of students, members of the Hong Kong-based Students & Scholars Against Corporate Misbehavior (SACOM), to reveal what was causing some workers so much anguish through a series of secret interviews. Employees, migrants from the Chinese countryside, spoke to their interviewers of incessant production line pressure during 12-hour shifts, humiliating punishment for any employee who falls behind the pace and scheduled slots for eating, sleeping and washing for the many workers who live in the on-site dormitories. All this for less than 150 euros a month.

Then, there’s the issue of how Apple’s incredible success as a business and its crisis-resistant profits sit next to the need for industry leaders to display environmental responsibility. In April this year, Greenpeace named Apple as the least green technology company in the world. The league table compiled by the environmental activists showed that Apples relies heavily on highly polluting coal power at the sites that house its servers. Last month, the Institute of Public and Environmental Affairs in Beijing — a Chinese environmental group — released a report claiming Apple’s local suppliers were discharging polluted waste and toxic metals into surrounding communities and threatening public health. Earlier this year, 137 workers at a Chinese factory near Suzhou were seriously injured by a toxic chemical used in making iPhone screens. Apple said it was taking steps to monitor and improve its subcontractors’ policies.

Apple is by no means the only company to leave itself open to criticism about the way it does business, especially in China. But no other firm in the world promotes itself as being the embodiment of a progressive philosophy and a better tomorrow as much as Apple. We cannot ignore that there is a disconnect between the imagined reality of the Steve Jobs world and the actual reality of Apple’s business practices. Anything less would mean we have lost our critical faculty. Momentary lapses such as those that followed Jobs’s death may be understandable, permanent ones are unforgivable. After all, if during George Papandreou’s premiership Greece became a place where employees received low wages for working in poor conditions, environmental policy became an afterthought despite the impression it would top the agenda and those who ultimately profited from this were outsiders, we wouldn’t call him a visionary, would we?