The Eurobonds that bind us 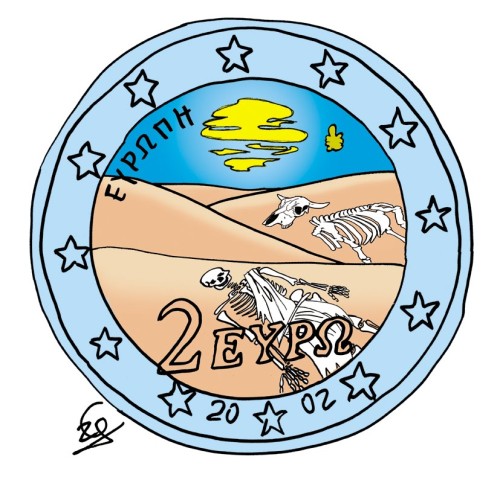 At first they appeared to be two disparate worlds even though they were physically separated by only about 100 meters: The Communist Party supporters who gathered in front of Parliament on Tuesday to tell International Monetary Fund Managing Director Dominique Strauss-Kahn to go home; and the journalists, academics and students who took seats in a snug underground amphitheater to hear a debate on how the media in Germany and Greece have covered the economic crisis.

However, these two seemingly unconnected events had much more in common than at first glance. In essence, they formed a microcosm of the European Union today, emphasizing the unrest and dissent that exist within states but also the disagreement and tension that exist between them. The Communists represented the growing disquiet about an EU that’s moving away from the platform of security and prosperity it was built on. The differing views of the Greek and German journalists and government officials on the panel epitomized the way the crisis has laid bare the contrasting visions that Europeans have about the way forward.

Europe takes its name from the mythological figure of Europa – so beautiful that Zeus transformed himself into a bull to seduce her and carry her to Crete. The tale is depicted on the reverse of the 2-euro coin. It’s the euro that has been at the forefront of carrying the EU to what looked like a promised land of economic growth and shared values. But now Europe is lost in a wilderness of debt and national interests and there is nobody around to whisk her off to greener pastures. The euro, however, has the ability to become the Union’s driving force again – even if this week’s events made that seem as likely as Zeus coming down from Mount Olympus to wipe out Greece’s national debt.

The disagreement and division in the air around Syntagma Square this week was in keeping with the mood of disunity that followed a proposal to launch a Eurobond that would, in theory, ensure greater economic stability within the bloc. The suggestion was made by Italian Finance Minister Giulio Tremonti and Luxembourg’s Prime Minister Jean-Claude Juncker, also the head of the Eurogroup, in the Financial Times on Monday. They proposed that the members of the eurozone issue common bonds, or E-bonds, because this pooling of debt would bring greater stability, fiscal integration and create a note so attractive to investors that it would bring down the cost of borrowing for eurozone members like Greece, which are currently suffering from soaring spreads.

The Eurobond would, as Juncker and Tremonti argued, send a clear message to financial markets that European politicians are committed to political, economic and monetary union and the “irreversibility of the euro.”

On the same day, a top economist at the British Treasury told a parliamentary committee that the collapse of the euro was “possible,” sparking all kinds of consternation across the continent and on the markets. It made the significance of Juncker and Tremonti’s suggestion even greater. Beyond the economic principles behind the idea of creating the E-bond, the proposal urges togetherness at a time when the EU desperately needs it.

The Eurobond, however, was immediately and flatly rejected by German Chancellor Angela Merkel. “It is our firm conviction that the treaties do not allow joint Eurobonds; in other words, no universal interest rate for all European member states,” she said.

French President Nicolas Sarkozy, who lately has formed a policy tag-team with Merkel, also shunned the proposition, arguing it would allow the more irresponsible states to run up debts in the knowledge it would not increase the cost of their borrowing. “If it’s about increasing Europe’s debt, that would have the effect of taking responsibility away from each state,” he said after meeting the German chancellor on Friday. “We want exactly the opposite – making states more responsible.”

The Netherlands and Austria were also against the idea. Along with Germany, these countries have lower debt levels, competitive economies and therefore pay much lower interest on their bonds than eurozone members at the other end of the scale, like Greece, Ireland and Portugal. A move to a Eurobond would lead to Germany paying higher interest as the risk of default among the weaker eurozone members would be factored into the note’s yield.

The German concerns are therefore understandable, but the alternatives to the Eurobond are equally worrying. Clearly, further steps need to be taken to bring eurozone members and their economic and fiscal policies closer together if the single currency is going to come out of this crisis with any long-term viability. If Germany rejects such moves, it opens up the possibility of creating a two-tier, two-speed euro, whereby the more stable countries introduce a “hard-currency euro.”

Such an idea was recently put forward by Hans-Olaf Henkel, former president of the Federation of German Industry, who is rumored to be considering launching an anti-euro party. The other alternative, which perhaps would not displease many Germans at the moment, would be a return to the Deutsche Mark, leaving the others to pick up the pieces of a broken euro. Either scenario would be disastrous for European unity.

Perhaps that’s why Juncker shed the cloak of diplomacy usually worn by European technocrats and gave an uncharacteristically blunt response. “Germany is thinking a little simply,” he told the weekly Die Zeit, accusing Berlin of rejecting the idea before studying it properly and of behaving in an “un-European manner.”

Who would have thought that the chief architects of a united Europe would one day be accused of being “un-European”? Even though the crisis has highlighted common weaknesses and interdependencies in Europe, it has also prompted countries to focus on their own interests more intently than before. Nowhere is this more evident than in Germany, where the national mood seems to be one of unwillingness to give up or give away what Germans have spent decades working for.

“Perhaps for the first time since the Second World War, they are allowing themselves to be defiant and proud,” Katinka Barysch, deputy director of the Center for European Reform, told the Financial Times. “Their export-oriented, stability-obsessed economic model is not up for discussion.”

At times, this has caused Germany to be shortsighted or even selfish: Its initial reluctance to bail out Greece, its insistence that the IMF be part of the rescue package, its persistence in ensuring that private bondholders share the liability for a permanent support mechanism or in its rejection of the Eurobond proposal.

But, again, the alternative of being a lone wolf rather than part of the pack is not as appealing as it might first seem. Not being involved in the single currency would have a disastrous effect on the German economy. Roughly 40 percent of German exports go to eurozone countries. These would all immediately become much more expensive if the Deutsche Mark returned. A downturn in exports would then have a series of knock-on effects, including a rise in unemployment. It would also mean the EU losing its voice in the global economy, where the USA and China would be left in a much more dominant position.

Whichever way Germany turns, its future seems inextricably linked to the EU and the euro. Ultimately, it has much more to gain from the eurozone riding out this crisis and emerging stronger on the other side than by cutting its losses now and going it alone.

Despite her recalcitrance, Merkel acknowledged as much on Friday. “If the euro fails, Europe fails,” she said. “This is a deeply serious matter for me and that’s why Germany will do everything to defend the euro jointly with the other members.”

That’s why Germany may change its mind on the Eurobond proposal. Yes, it will make the cost of borrowing a little more expensive, but the alternatives could be more damaging. “What are the risks to the German yield curve of the destruction of around half of German banks’ capital if the eurozone was broken up?” writes Joseph Cotterill in the FT’s Alphaville blog. “Or if, say, the European Financial Stability Facility’s lending capacity becomes so debased that only a direct fiscal transfer will satisfy markets, should it come to Spanish or Italian crisis?”

In the midst of the acrimony and disagreement clouding Europe’s decision-making process, one thing seems clear: The future of Europe, as well as that of Germany, rests on the ability of its policymakers to find the points where national interests meet common interests. This is the place where Zeus now has to carry Europa. It is here that she has a chance of living securely and prosperously.

This commentary was written by Nick Malkoutzis and was published in Kathimerini English Edition on December 11, 2010.